I’ve just done a panel with the Liquid Iron and Instant Rust. I’ve gotten to the point where it looks really awesome. However, these panels are going outside, and if it rains on them, the rust will runoff and stain whatever’s beneath it.

To fix this, I’m going to wash it down and remove any residue that’s on the surface. I let it dry and brush on two coats of the Instant Rust Clear Sealer, this will seal it all in. It will stop it from running and it will still look absolutely fantastic.

Porter’s Instant Rust Clear Sealer is designed for use when protection, sealing or isolation is required on interior or exterior surfaces that have been finished with Porter’s Liquid Iron and Instant Rust.

Just going to put on the wall behind me and then I’ll be brushing it on. Before I put that on there, I’ll just talk about the undercoat that I’ve put down first which is Porter’s Limeproof Undercoat Sealer. I’ve just rolled on one coat and it’s completely dry.

I’ll be brushing the Lime Wash over the top so I’ll just put this down here and start brushing on my Lime Wash. Today I’m using a colour called Aubusson. I’m going to be brushing on my Interno Lime Wash using a lime brush, which gives it a beautiful faded look. It doesn’t give you the hard edge. 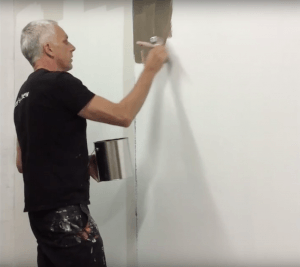 Important thing with Lime Wash is when you’re brushing it on, work in an area about as wide as your shoulders. Obviously, I have an incredibly wide shoulders so I need a very large area to cover.

But work in an area about as wide as your shoulders. It makes life a little bit easier. The whole idea here is it has to be random and relaxed. The more relaxed the more random you are, the better this wall is going to look.

Now, obviously, I look pretty relaxed. That’s going to look pretty awesome at the end of this demonstration.

Normally you cut in, which means you do the edges as you go. Don’t do the edges first and then fill it in because you’ll get a letter box effect. It looks a little bit odd.

Do the edges as you go and keep that brush not too far from the surface of the wall and just work down the wall. Nice and relaxed, nice and even. Not too much, not too little. Just putting on uneven coat.

Now I’m doing my next drop so I’m going to be working across that little area there that were already painted so I’m taking the wet area across into the dry area. We’re i 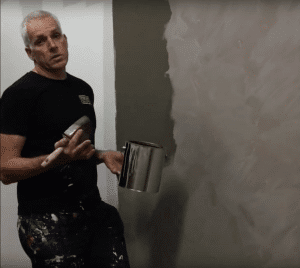 magining that I’ve got a corner next to the ceiling so just going to cut in next to that and then just work my way down the wall.

Once again, keeping that edge wet and not stopping. Don’t have a break. Don’t take it easy. You got to keep moving. Once we’ve got to the edge of the wall, that’s when I can finish. I am now brushing on my second coat of Interno Lime Wash. I’m putting it on exactly the same way as the first coat and keeping that edge wet.

I’ve got a really random, relaxed, uneven brushstroke going on. The more relaxed it is, the better it’s going to look. I’ll just keep moving across the wall going in one direction.

After two coats of Interno Lime Wash, it looks fantastic, it has really bloomed with all the lines coming through. It’s got that really soft and subtle variation.

Same technique, with just one coat. Random, uneven crisscross over the whole wall.